At the weekend, Denise (friend and fellow museum digital geek) and I went along to see Sense and the City  at the London Transport Museum.  Ever since I started working with the guys from CASA I have become more and more spellbound by spatial visualisations.  Following on from the workshop at InterFace by Martin Austwick on Processing, I was ready to go and get me some inspiration for playing with my newly taught visulisation programming skill (skills is a strong term, press buttons and hope it works is more accurate). So I was really excited to see a spatial and visually striking exhibition hit the museum.  Sense and the City explores how the future of London was imagined in the past, with obligatory Space 1999 image, and how new technologies are influencing transport, entertainment, communication and news in the present.

It was fascinating to look at architectural drawings and other visions of the future from the past.  It’s strange to think that previously everyone seemed to imagine everything, from computers to cars, would get bigger, not smaller.  Some of the Utopia imagery is really interesting to stand and stare at, such perspective and plenty of flying cars and Helicopters for everyone! I really enjoyed how visually stimulating the exhibition is, with touchscreens in abundance and changes in the lighting in different sections really affects how you interact with the exhibition as a whole.  Although I’m slightly sceptical of the RYNO on display, a weird one wheeled contraption, which looks slow and dangerous, give me my mountain bike any day of the week over that.

One of the most interesting elements of the exhibition is the concepts suggested by the Royal College of Art, who present new ideas on future technology and transport.  I really loved Michael Lum’s ideas for Augmented Wayfinding:  Street signage which dynamically updates content using social media content.  This idea highlights that everyone has a unique understanding of their location and how it will affect their movements around cities. However, currently street signage is static and doesn’t take the individual into consideration. I love any idea that focuses more on the individual than the mass.

The exhibition also showcases quite a lot of CASA’s work on giant screens, which make the visualisations really vibrant.  The only thing I would say is that there is a lack of labelling in this section, I’m lucky I know that’s the Boris Bike map, and boy does it look cool, but if you missed the intro screen you have no idea what it is, and you stare for ages at little blue worms whizzing around.

Visiting Sense and the City reminded me of the Virtual Cities panel at DH2011. Two projects during the panel session really stood out for me.  The first being Hypercities: 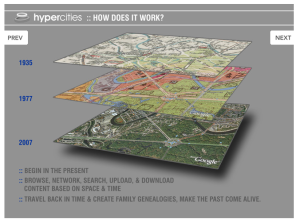 Hypercities is a digital cultural mapping project, built on the idea that every past is a place.  The HyperCities platform is all about exploring, learning about, and interacting with the layered histories of city and global spaces.  It attempts to tell stories through place and time. Poly-line stories, making the memories of a space visible.

Secondly Chris Speed; who is a really engaging speaker, talking about his work with Tales of Things and Walking Through Time.


Walking Through Time is a really interesting project which uses a mobile app for phones with built-in GPS to allow users not only find themselves in the present day Edinbugh, but find themselves in the past.   In essence letting the user to touch the city, layering ‘old time’ over ‘new time mapping’.  Enabling users to scroll through time and navigate places using maps that are hundreds of years old. The slider in the map drops you down into a previous historical map, showing you what parts of Edinburgh aren’t there anymore.  Chris highlighted that Trees transcend many old and new maps. Trees are temporal poles. I like the sound of that, trees are rooted right through the historical and present and probably future layouts of the city. Chris also stated that Google’s maps are full of pockets of time. You know where you are, but you don’t know when you are. This is something I hadn’t really thought about before.  This is something that crept into the Sense and the City exhibition; maps only are a snap shot of a segment of time.   Which is why projects like walking through time and CASA’s New City Landscapes work are really interesting to see how technology can be used to change perceptions of city environments.