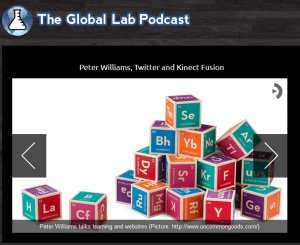 The whole experience of doing the Global Lab has been brilliant and traumatic. I hate the sound of my own voice; I think everyone dislikes hearing themselves really. Normally because in our heads we actually sound composed, sensible, not at all high pitched, yet for some reason as soon as the voice is trapped in a recorder, the realisation hits; “That is what other people hear when I say stuff!? Ugh.” Particuarly as I have a lisp, I try to avoid having my voice captured as much as possible. So apologies now for the ths, fs, sshhs that appear throughout.

So once I got over the “oh no my voice sounds like that!” sensation, it was really good fun. I’m really grateful to Steve, not only is he great to present with, but he is also an editing genius.  It took over two hours to record the entire thing! You wouldn’t believe the amount of takes, and editing poor Steve had to do; as quite a lot of my segments involved nervous laughter (and multiple Freudian slips), hitting the microphone with my gammy arm, coughing, urms, erms, lacking the ability to clap, and panicked silences. But the edited version actually sounds really good!

So if you want to have a listen to me, Steve and my lisp talking about how addictive Twitter actually is the new application of the Xbox Kinect and my interview with Pete Williams about his research in Information Studies for people with learning difficulties then tune in below!

I’m hoping the next episode I won’t be as nervous, and perhaps we might be able to get it done without me breaking something. 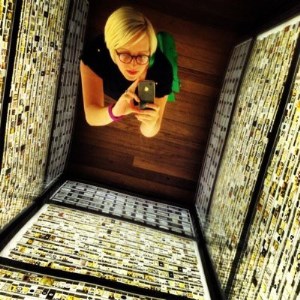