I’ve Just got back from MuseumNext, which was brilliant! It’s a great conference, you feel like you are surrounded by friends rather than international colleagues. This produces a really warm and relaxed atmosphere to hear the now and next in digital museum goodness. I would recommend it to anyone who is interested in digital innovation and museums.

Below are some of my highlights:

Seb Chan’s (Smithsonian Cooper-Hewitt, National Design Museum )keynote kicked things off describing his journey from his arrival at the Smithsonian Cooper Hewitt Design Museum in New York and the challenges he faced and continues to face whilst working to change the mindest of an entire museum, and how digital data can be used in radically different ways. Basically his task was to start completely from scratch and rethink the way the museum functions with digital.

I really liked Seb’s point about ‘Hiring people smarter than you’, and ‘Investing in training’ because once you have a good team around you, other more radical changes can be supported and advocated for. Seb went on to say how to encourage accelerated digital change by setting a rhytm of releases, with the newly established in-house production and development teams. Taking a ‘prototype is the product’ approach and started releasing barely-built iterations of collections as soon as they were ready. Seb classes this as ‘Institutional Wabi-Sabi’ – essentially living with imperfection, chaos and change. He pointed out that all design is about testing things and reinventing them and refining, so being open to releasing incomplete versions of the developing service was an demonstration of a commitment to open design

Culture Snackers and Getting people closer to art.

The Rijksmuseum website won Best of the Web at Museums and the Web last month, so I was looking forward to hear Peter Gorgels talk about it. The Rijksmuseum has just re-opened after a 10 year refurbishment to queues around the block. They had a really nice way of advertsing the re-opening by bringing the collection out into the real world: check out quite possibly the best publicity stunt for the opening and they also put art on milk cartons and dresses. I don’t know the last time I was told by so many different people that I would have to queue for hours to get in to a Museum.

Peter Gorgels described how the website design had been based around an extremely simple concept: Getting people closer to the art. Riksmuseum identified a target group to focus on with targeted behaviour; a social sharing and a tech-savvy generation of “cultural snackers”. Peter suggested that everyone is a culture snacker. I like this term. I am going to start using it immediately. It was fantastic to hear how user orientated Rijksmuseum have been from the beginning. Peter described how scoping started with looking at the ways people use digital in their everyday life, on phones, tablets, laptops, at home, at work, on the train, whilst walking around lost. The design process established a core value: ‘close’. Walter Benjamin’s ideas around aura of artwork got at mention, as Peter believes that the ability to get digitally close to the art enhances the aura of the original artwork.

On top of the complete overhaul of the website the Riksmuseum also released Rijksstudio. I really like the concept of Rijksstudio. It is about putting the art first and encouraging users to be inspired by the great art and to go on and create their own works like this awesome video.

Getting Down and Dirty with Big Tech Companies

Dave Patten’s keynote discussed the ins and outs of the Science Museum’s Google Web Lab project. Dave described the interesting challenges of working with Google on Web Lab, a hybrid digital and physical exhibition. Dave gave a glimpse behind the scenes of big tech in action. I do wonder how much of the not so good experiences that probably got swept under the carpet and cant be talked about openly. Dave described how the entire process of making Web Labs was a live beta not only of the code but of the physical layout of the space. Which challenges the traditional idea of perfection on gallery. I think quite a lot of us were really jealous, I mean what museum wouldn’t kill for a budget and tech team like that? But in reality Dave did stress that if museums are looking to work with big tech partnerships there is a need to consider if the institutions are adequately set up to allow for rapid prototyping and development that these big digital projects need. This is a point that Carolyn Royston and I re-iterated in our talk about R&D in museums. Can your museum cope with the pace of it all?

Fainting as a KPI: Dative to Ablative

By far the most inspirational talk was the keynote by Michael John Gorman from Dublin’s Science Gallery . Everyone in the room now either wants to visit or work there immediately. What was absolutely fantastic about this talk was that it didn’t focus on digital innovation, but simply on being awesome. Michael talked about some incredible shows (Blood Wars! Donate and fight your white blood cells, kissing Petri dishes, sensored speed dating…) and talked about going from ‘Dative thinking’ to ‘Ablative thinking’. ‘Dative thinking’ means doing things to and for your audience. ‘Ablative thinking’, in contrast, implies allowing things to be done by, with and drawing ideas from an active community of participants. A fully participatory experience. Rather than seeing participation as an end point, Science Gallery places participation at the core of its thinking and design process. Michael talked about the size of the Science Gallery being a plus, its small, so they can do things quickly. They also benefit from being partnered with Trinity College Dublin, highlighting their ability to draw on new and innovative scientific research to inspire new exhibitions. What Michael highlighted so well is that the museum is a platform for collaboration that contributed to society in ways far beyond servicing museum visitors. In other exciting news they are hoping to spread the Science Gallery way of thinking with a network of Science Galleries across the globe!

Oonagh Murphy from the University of Ulster presented a really good session on nicking ideas from big museums and implementing them in smaller museums to help with digital development. The session was based on a 6-week research visit to museums in New York. Oonagh identified 4 key trends which could be implemented in smaller museums:

There were a few talks at MuseumNext that focused on getting young people involved! It was great to see how the next generation of museum lovers are already doing fantastic work.

Sharna Jackson (Tate Kids) and Mar Dixon highlighted the importance of engaging young audiences and gave the example of how they did this during the recent Damien Hirst retrospective. They gave Tate Kids over to Charlotte Dixon, Mar’s daughter, who was 10 (now 11). Sharna explained that it is really important to relinquish control of the museum brand, and encourage a range of voices from outside of the organisation. And if you are going to do that, then it has to be the whole hog, when you let kids be the voice of your organisation, don’t censor, edit or correct them. They discussed Hirst’s spin paintings event in Covent Garden and how it deepened Tate Kids engagement and reach from preschool to pre-teens and how getting younger audiences involved turns them from fans to advocates.

N8, the team behind Amsterdam’s Museum Night , ran a series of fringe events to compliment the main program at MuseumNext. They are a pretty nifty marketing and audience development style agency that work with Amsterdam museums. They have an organisational model that makes even me feel old, staff have to be 27 or under, and can only work at the organisation for a maximum of 3 years. Which is a really great way of making sure that they remain relevant to the audiences they are trying to engage. N8 talked about digital culture and bringing different voices into museums. One example they showed was a break dancer taking a tour of the Rijksmuseum and talking about his own thoughts about the collection, and ended with him break dancing in the museum. A really refreshing personal interpretation.

Sanne Van de Werf (Royal Museum of Antwerp), along with a terrifyingly eloquent 17 year old, described the development of an app by young museum ‘ambassadors’. Based around Flemish Expressionists, The Royal Museum of Fine Arts Antwerp let a peer group education project think of and design an app for its new exhibition. Not only did this really engage teenagers in the museum and Flemish Expressionist art but it enabled the museum to learn more about how young people interact with a collection and to see their museum from a fresh perspective. A win win for everyone involved.

The great thing about MuseumNext is that it has a such a relaxed atmosphere tmeaning that it is really easy to go from conference sessions, to breaks, to beer, with a smile on your face, learning cool stuff all the while. One of the brilliant things that I really enjoyed this year was that MuseumNext and Tumblr teamed up to run a competition to create the best ‘Tumblr’. Mar Dixon and Oonagh Murphy and I became a bit obsessed with it and eventually it paid off as we won with Immersive Serendipity!

At first I found Tumblr incredibly difficult to use, but actually having a specified platform, meant that determination and trying out different scenarios was worth it. This was a much better way of getting people to learn how to use a platform. I wouldn’t have attended a workshop on Tumblr specifically, but having a competition run throughout a conference was a lot more engaging, and I have come away with the ability to use something other than wordpress!

Speaking of obsession, also became a bit obsessed with Paper app, a drawing app for iPad’s. John Shelvin created MuseumNextSketch a fantastic Tumblr using drawings from it and then we ended up having a draw off during the evening of different MuseumNext delegates. John had a bit of a headstart with his Fine Art degree, I, however, have enthusiasm (and a distinct lack of artistic skill) in abundance, and came up with some fabulous (rubbish) artworks. 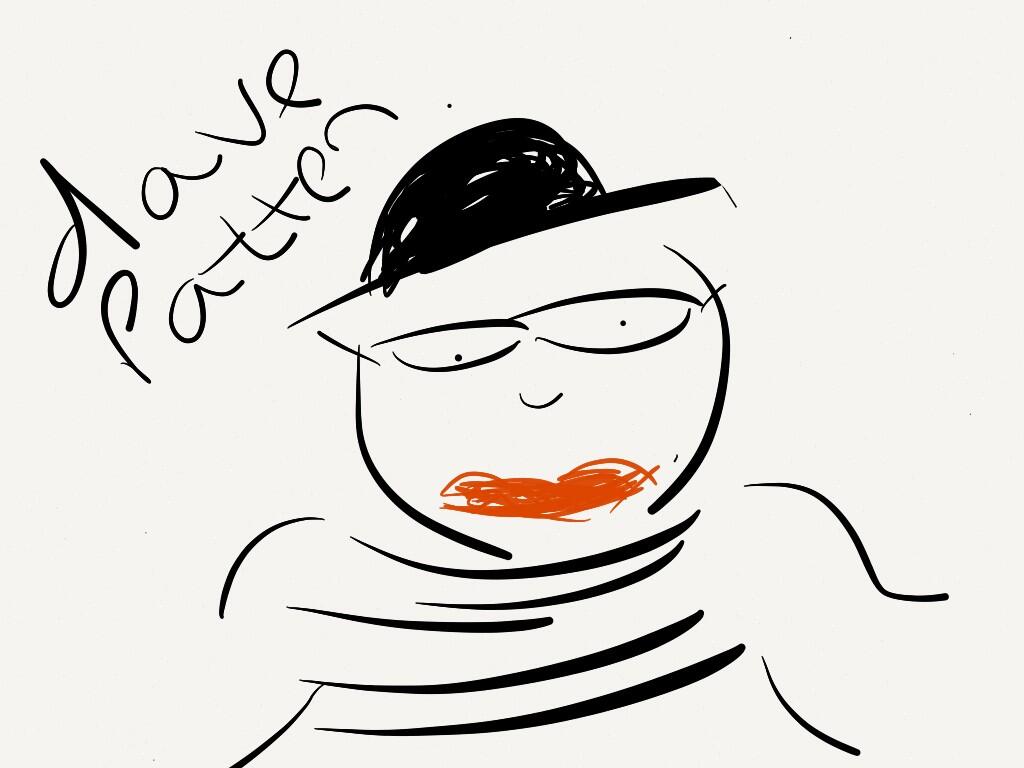